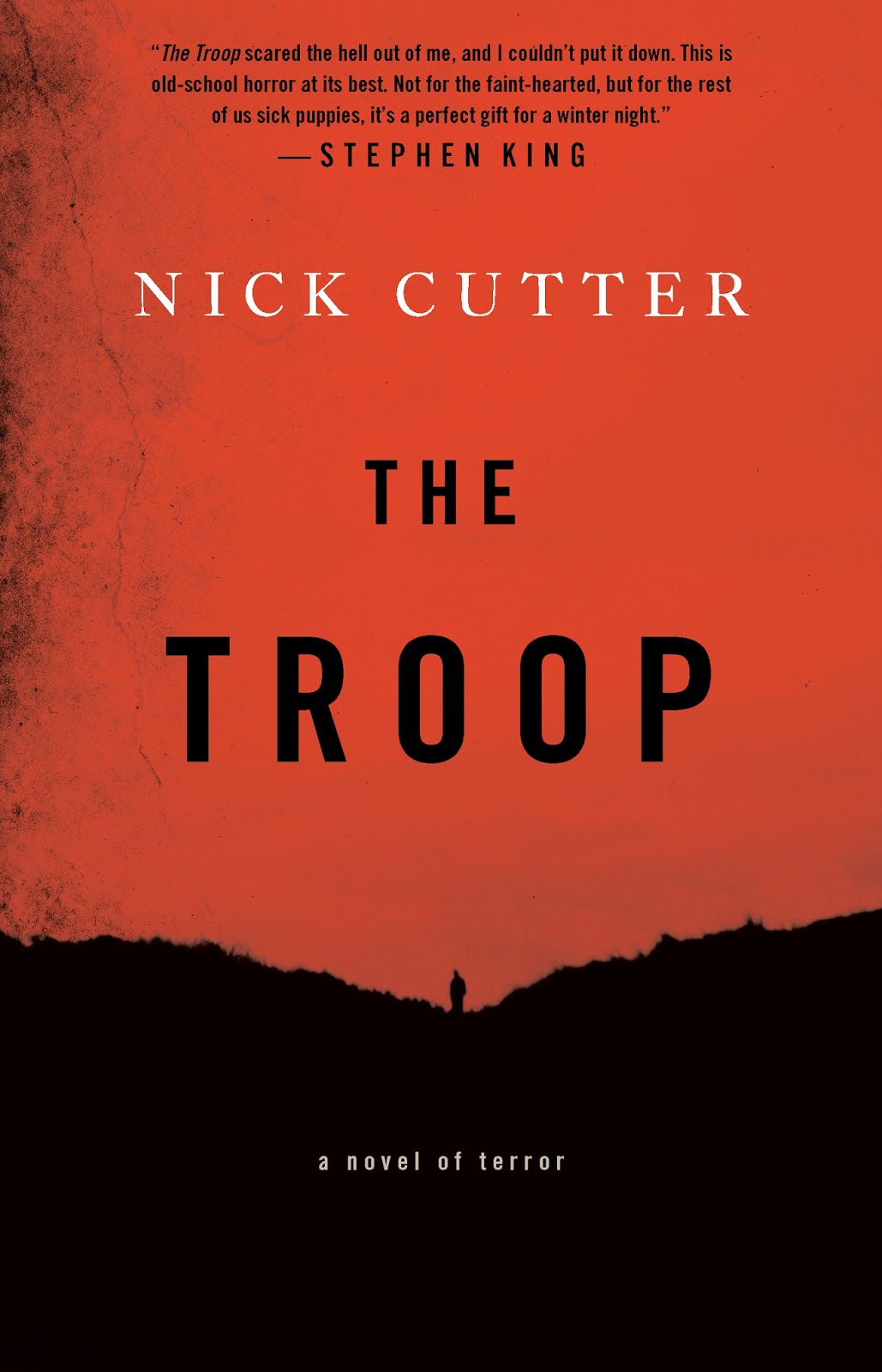 Yes, in a book that's been described as part Lord of the Flies and part 28 Days Later (which isn't a bad comparison, even if it only tells half of the story), The Troop proves to be a throwback to old-fashioned, late 80s, pulp horror, with a little 90s cynicism mixed in. Nick Cutter has crafted a grisly tale here that pulls no punches, and which wastes absolutely no time in getting to the good stuff.

At first, the story structure seems a little odd, especially since it spoils its own ending early on. The bulk of the story takes place in real time, exploring the Boy Scout troop's struggle to survive a situation they barely even understand. Spaced in between chapters, however, is a series of newspaper articles, scholarly pieces, and courtroom transcripts of the inquiry that is destined to follow. Ultimately, however, that second layer of storytelling really enhances the story, adding additional weight to the situation, and creating new doubts and questions for the reader. It also creates more of a mystery than we might have otherwise expected, as we try to guess which of the boys is the sole survivor.

The contagion at the heart of the story is as disgusting as it is brilliant. If you've ever thought a tapeworm was gross, or shuddered at the thought of people who deliberately subject themselves to said worms in a desperate effort to lose weight, then get ready to lose your lunch. The tapeworms here are genetically engineered to be ruthless parasites who quickly devour their hosts from the inside out, creating in them a ravenous, insatiable hunger. We're talking men who, in a matter of hours, begin to look like desiccated walking corpses, and who will chow down on anything they can get their hands on - from bugs, to dirt, to the wooden splinters of the cabin floor. Then, just to add to the ick factor, you can see the tapeworms wrapped around their victims' spinal cords, making their back-flesh flow and undulate.

As for that teenage sociopath, I don't want to spoil one of the darkest aspects of the story, but he's the creepiest part of the tale, simply because he's so human. There's an extended scene that will stick with you for a very long time, where he not only convinces another Scout that he's infected, but all-too-easily talks him into slicing himself up in a futile attempt to catch the tiny worms inside. What he does to the first Scout to be infected is even worse, not just because it's so cruel and so playfully callous, or because it gives him a disturbing hard-on, but because he contrasts it to the abuse of a kitten that first catapulted him over the line from curious to sociopathic.

If you're in the mood for a good, intense horror story, and have the strong stomach needed to make it through to the end, then be sure to check out The Troop. Just be careful what you touch, eat, drink, or breathe, because that next pang of hunger just might be something more . . .