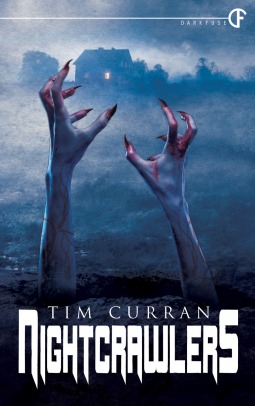 Despite something of a slow middle section and an ending that, as imaginative as it was, I felt robbed the story of much of its shock factor, Nightcrawlers was a solid, enjoyable, well-told tale of small town, subterranean horror. Tim Curran has a flair to establishing a scene, for imbuing it with real dread, and for keeping the gore fresh.

The opening chapters here are some of the tightest, most terrifying I've read in a very long time, with half-eaten bodies littering the field, a suffocating fog, sucking pits of mud, crumbling ruins, and suspicious noises all around. You can feel the claustrophobic terror of the situation, and the fact it's a group of well-armed cops who are so unnerved by the situation just adds to the horror. We only hear the first cop being taken down by something beyond the trees, but when we see the next one literally pulled down into the mud, that's when things really take off.

After that first dreadful night, the story definitely slows down a bit, but that's not to say it's any less interesting. The ugly history of Clavitt Fields is revealed through awkward conversations, difficult confessions, old news clippings, and some childhood memories. Each is a new layer, laid atop the muddy foundations of the opening scenes, to create a story that's even uglier, even creepier than we originally thought. By the time the rescue team is deployed, it's really more a retrieval team than anything else. Together, the cops must break into an old well, descend 30 feet into the earth, and make their way through a series of subterranean tunnels, complete with rotted wooden doors, crumbling masonry, and a protruding bit of bones and coffin where their journey extends beneath the cemetery.

I won't say much about the nature of the Nightcrawlers themselves, since that revelation is key to the final act, but they're an insidious sort of threat to the citizens of Clavitt Fields. It's a strange experience reading through the final chapters, as horror gives way to fascination, and terror yields ground to an almost sympathetic sort of understanding. The clues are there, so it's certainly not a cheat or a cheap twist, but Curran is to be commended for so deftly turning the story about on itself.

Ultimately, Nightcrawlers wasn't as much fun as Worm, but it's a more robust and satisfying story. Definitely worth a read, both for the dramatic power of the opening scenes, and the ingenuity of the closing ones.