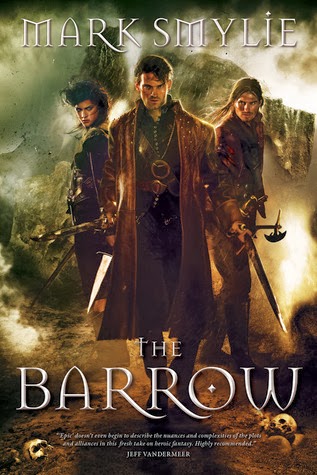 There is definitely a new trend in epic fantasy, one that I first encountered late last year with The Iron Wolves by Andy Remic. It's a trend towards a darker, more mature sort of epic fantasy, one that reaches deep into the genre's pulp sword-and-sorcery roots, but which refuses to hold back on the sex and the violence. It certainly contains elements of grimdark, especially the trend towards anti-heroes, but it chooses to smirk rather than scowl along with the reader.

It doesn't take long for The Barrow to declare its intentions regarding that trend. If you read the cover blurb and thought "Set in the world of the Eisner-nominated Artesia comic books" meant this was going to be a Young Adult or New Adult sort of romp, then think again. I haven't read the comics, so I don't know what liberties Mark Smylie may have taken in translating his world to prose, but this is certainly closer to a Heavy Metal novelization than something from Marvel, DC, or even Dark Horse.

In terms of world-building, there is an incredible amount of detail here to be explored. The geography is varied and well-defined, with the cities, mountains, fields, trails, roads, barrows, and barren wastes all having a tale to tell. Time and time again the characters top to tell one another a story, a bit of history or mythology, about their world and how this piece or that came to be. While those stories have the potential to be read as an info-dump by some, the backstory of Artesia is fascinating, and each story adds a welcome layer to the proceedings. There are probably enough stories here to fill half a dozen books on their own, and I (for one) appreciate that kind of narrative depth.

As for the characters, I was shocked by how willing Smylie was to sacrifice them to the cause. It doesn't take long to realize the stakes here are high, and that survival beyond the page is guaranteed for nobody. Once you get over the shock of seeing so many main characters murdered, dismembered, and eaten so quickly, you begin looking at the story with a fresh eye. When no character is safe, the sense of dread and mystery becomes that much more pronounced. As for those characters, they are indeed a crew full of scoundrels, deviants, and ruffians. Stjepan Black-Heart is about as questionable a leader as you can get, a man who is open with his perversions but secretive with his thoughts, and when a brothel owner and a mad magician seem the least distasteful of the lot, you know there's no crime, passion, or sin too low. There is one character in particular who crosses a line that I'm sure will shock most readers and, given his prominence in the tale, it's one of the biggest shocks in the story. I honestly felt betrayed by the revelation of his true nature, but it turns out to be crucial to the rest of the tale.

Plot-wise, this is a story that's as deceptive as its characters. On the surface, it looks simple - rob a tomb, find a map, gather a crew, and rob another tomb. It's no nearly so simple, however, and the bulk of the tale actually takes place between the two tombs. There are curses and conspiracies, political schemes and criminal agendas, and plots and counterplots to be navigated. The scenes within Gilgwyr's brothel are a turning point, revealing the story's true depth of depravity, vulgarity, and imagination. Even if you don't like Gilgwyr's or what he's scheming, you can't help but admire the intricacies of his agenda. Having said that, it takes a long time for many of those schemes to pay off, and some readers may be turned off by the amount of seemingly unnecessary detail. Patience is rewarded, however, with the final act of the story tying everything together, and revealing just how significant and how connected those events are.

As for that ending, it pays off in every respect. Whereas many fantasy novels build up our expectations with hints, promises, and threats of monstrous violence, only to stop short, Smylie delivers on his promises. From monstrous to madness, from necromancy to necrophilia, the events of the climax goes far beyond what we might have anticipated. He allows the worst to happen . . . and then pushes the horror even farther. There are no close calls or near escapes here, just one crushing defeat after another, with a victorious twist.

If you've ever wondered what it might be like to play Dungeons and Dragons with a bunch of death-row inmates, while a sadistic warden whispers depraved encouragement behind you, then you are indeed ready for The Barrow.