Venturing Beyond the Rift with Peter Watts (#bookreview) 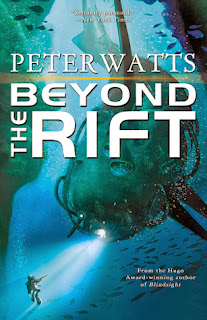 Science fiction is an incredibly diverse genre, both in terms of content and in terms of storytelling. At one end of the spectrum you have your pulp sci-fi, rollicking adventure stories that often skirt the boundaries of science to tell their fantastic tales. Further along the line, at the middle of the spectrum, you find space opera, which generally uses (and often abuses) the more outlandish possibilities in science to tell a tale. Finally, at the other end of the spectrum you have hard science-fiction, which more often than not uses the techniques of the tale to convey the intricacies of its science.

That, of course, is a gross simplification, but if we think of the spectrum in those terms, then Beyond the Rift is the kind of collection that often peers back towards the centre, but which is very firmly grounded in the hard. Peter Watts is an interesting guy, a scientist, an author, and something of a political philosopher. He's been described as "too dark" by some, and as both "exhilarating" and "deeply paranoid" by others. To dismiss him as just another depressing, pessimistic hard science fiction author, however, is to do him a huge disservice. Personally, I would lean more towards terms like deep, daring, and deliberately thoughtful. He's an author who isn't afraid to stare off into the bleakness of space and ponder our own insignificance, but one who also isn't afraid to look inward and question the very core of what makes us human.

I won't attempt to tackle everything in the collection, but instead look at the highlights.

"The Things" kicks off the anthology with, as he describes it himself, a bit of fan fiction. Watts takes the story of The Thing and turns it inside out, exploring the shapeshifting monster as not the aggressor, but the victim. He stares back at humanity from an evolutionary distance, expressing not the horror of the monster lurking inside, but the emptiness it inhabits.

"The Island" is a bleak, creepy sort of tale, one that tackles the subjects of first contact, artificial intelligence, genetic manipulation, and extended lifespans. It's absolutely stunning in its ingenuity and scope, but rather cold in its long-term prognosis. "The Second Coming of Jasmine Fitzgerald" is one of my favorites, a simple story about sanity and the war between the psyche and the soul, which dares you to accept the fact that it may also be about resurrection and restoration as well.

"The Eyes of God" is absolutely brilliant in its exploration of free will, of human privacy, and of the question between intent and action. It takes a bold, almost frightening twist at the end, when you find out what heinous sin the computer deemed the protagonist to be capable of, but Watts asks some crucial questions here that force the reader to come to a difficult conclusion.

"Nimbus" is probably the simplest, most straightforward of all the tales, but I liked its idea of an antagonistic sky almost as much as I appreciated its exploration of a father's conflicting emotions. "Mayfly" continues with the parental theme, but takes a hard look at what happens when we dare to mess with the natural order of conception, birth, and nurturing.

"Ambassador" takes another stab at the first contact story, but perverts the assumption that any race intelligent enough to make first contact must be benevolent. It's a tale with some rather chilling implications, not the least of which is how far the instinct for self-preservation can push someone.

"Hillcrest vs. Velikovsky" is a short, straightforward tale that almost seems out of place in the collection, but which is still intriguing. Watts asks whether faith can really overcome human illness, and then asks whether it's a crime to reveal that placebo for what it is. It's almost a cruel sort of courtroom drama, but fascinating on an intellectual (and even spiritual) level.

The collection ends with "A Niche" that, quite literally, takes us into the rift itself. It's probably the most complex narrative in the collection, one in which a woman's abuse has oddly conditioned her for the claustrophobic confines of living underwater. It's a very psychological tale, one which forces a confrontation between the scientist and the experiment. Watts baits us early and takes his time reeling us in, waiting for the very end to reveal precisely what's going on, but the payoff is worth it.

Like I said, Beyond the Rift is deep, daring, and deliberately thoughtful. It's not a collection to be breezed through in a few sittings, but one which demands we pause after each story to let it settle, and to see what our imagination can make of it. It is definitely hard in the sense of where it falls in the genre spectrum, but easier reading than most tales claiming to share that same space.