on November 04, 2013
If it's Monday, then it must be time for Mailbox Monday, a weekly meme that provides a virtual gathering place for bloggers (and readers) to share the books that came their way over the past week. Originally hosted by Marcia, of To Be Continued..., it has since become something of a book tour, with a new host each month. This month's host is  Crystal @ I totally paused!

Here are the books that found a home on my shelves over the last week:

The Barrow by Mark Smylie
Received via NetGalley
Pyr (March 4, 2014)

When a small crew of scoundrels, would-be heroes, deviants, and ruffians discover a map that they believe will lead them to a fabled sword buried in the barrow of a long-dead wizard, they think they've struck it rich. But their hopes are dashed when the map turns out to be cursed and then is destroyed in a magical ritual. The loss of the map leaves them dreaming of what might have been, until they rediscover the map in a most unusual and unexpected place.

Stjepan Black-Heart, suspected murderer and renegade royal cartographer; Erim, a young woman masquerading as a man; Gilgwyr, brothel owner extraordinaire; Leigh, an exiled magus under an ignominious cloud; Godewyn Red-Hand, mercenary and troublemaker; Arduin Orwain, scion of a noble family brought low by scandal; and Arduin's sister Annwyn, the beautiful cause of that scandal: together they form a cross-section of the Middle Kingdoms of the Known World, brought together by accident and dark design, on a quest that will either get them all in the history books, or get them all killed. 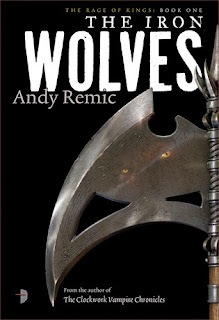 Thirty years ago, the Iron Wolves held back mud-orc hordes at the Pass of Splintered Bones, and led a brutal charge that saw the sorcerer Morkagoth slain. This ended the War of Zakora, and made the Iron Wolves heroes.

Now, a new terror stalks the realm. In hushed whispers, it is claimed the Horse Lady, Orlana the Changer, has escaped from the Chaos Halls and is building an army, twisting horses, lions and bears into terrible, bloody hunters, summoning mud-orcs from then slime and heading north to Vagandrak where, it said, the noble King Yoon has gone insane...

After hearing a prophecy from a blind seer, aged General Dalgoran searches to reunite the heroes of old for what he believes will be the final battle. But as mud-orcs and twisted beasts tear through the land, Dalgoran discovers the Iron Wolves are no longer heroes of legend... Narnok is a violent whoremaster, Kiki a honey-leaf drug peddler, and Prince Zastarte a drinker, a gambler, amoral and decadent: now he likes to hear people scream as they burn...

United in hate, the Iron Wolves travel to the Pass of Splintered Bones; and as half a million mud-orcs gather, General Dalgoran realises his grave error. Together, the Iron Wolves hold a terrible secret which has tortured them for three decades. Now, they only wish to be human again... 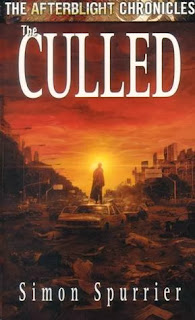 The world has been devastated by an epidemic. Although there are pockets of an attempted continuation of civilisation, the truth is that the world has gone to hell in a handcart. The reason for this is a disease that has wiped out most of the world's population. It kills almost all those who are not of the blood group 'O neg'. Those people who survive are untouched. Everyone else dies. Infrastructures have collapsed. Mobs run rampant. The only kind of law that exists is that imposed by the people with the biggest guns. In this devastated and chaotic world who can bring hope and order? The Blight arose from nowhere. It swept across the bickering nations like the End of Times.

As the numbers thinned and societies crumbled, the survivors picked their way between silent streets and looked out on the squalid new order. Hotheaded religion and territorial savagery rule the cities now. Somewhere, amidst the chaos, a damaged man receives a signal, and with it the tiniest flicker of hope. This is the chance to rediscover the humanity he lost, long ago, in the blood and filth and horror of the Cull. He mustcross the Atlantic, defeat warrior gangs in New York and seek out the location of his missing love. 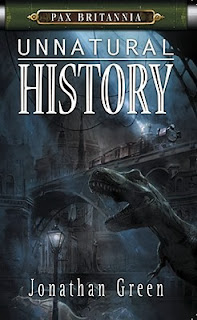 In the closing years of the 20th century the British Empire's rule is still going strong. Queen Victoria is about to celebrate her 160th birthday, kept alive by advanced steam technology. London is a fantastical sprawling metropolis where dirigibles roam the skies, robot bobbies enforce the law and dinosaurs are on display in London zoo. Welcome to Magna Britannia, a steam driven world full of fantastical creations and shady villains. Here dashing dandies and mustachioed villains battle for supremacy while below the city strange things stir in the flooded tunnels of the old London Underground.

In two scant months the nation, and all her colonies, will celebrate 160 years of Queen Victoria's glorious reign. But all is not well at the heart of the empire of Magna Britannia. A chain of events is about to be set in motion that, if not stopped, could lead to a world-shattering conclusion. It begins with a break-in at the Natural History Museum. A night watchman is murdered. An eminent Professor of Evolutionary Biology goes missing. Then a catastrophic overground rail-crash unleashes the dinosaurs of London Zoo.


As for what I'm reading, I have reviews coming up over the next 2 weeks for: