on October 17, 2013
Short story anthologies are always hit-or-miss for me, with the quality of the first few stories pretty much determining whether or not I'll soldier on. Unless the theme of the anthology is really innovating or compelling, I'll sometimes just hit my favorite authors and bypass the rest. When I don't, I find that I'm far quicker to pass judgement on individual stories than with a novel, usually making a read-it-or-skip-it decision within the first 2 pages.

That, I guess, is a long-winded way of assuring you that my silence on a particular story is not a critique or a condemnation, but simply an acknowledgement that we chose not to waste one another's time. 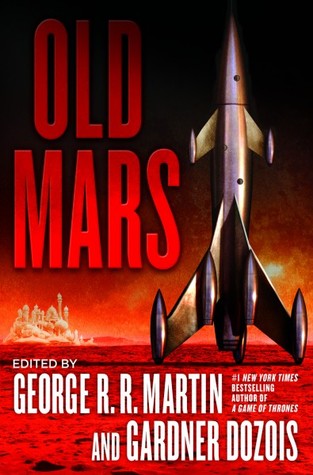 Old Mars is a deliberately retro style pulp sci-fi anthology, edited by George R.R. Martin and Gardner R. Dozois. This is a collection that gleefully turns its back on things like Spirit, Opportunity, Curiosity, and the rest of the Mars rovers to revisit a time when the canals of Mars were full of the promise of alien civilization.

The Ugly Duckling by Matthew Hughes was a fascinating story about a covert sort of archaeological expedition to Mars, complete with a little social commentary about obliterating the past in the pursuit of progress.

Sword of Zar-Tu-Kan by S. M. Stirling is one of those stories that barely slipped past the read-it-or-skip-it test, but despite being a bit too cute for my taste, still managed to entertain. Shoals by Mary Rosenblum, on the other hand, blew past the test with flying colors, but failed to sustain my enthusiasm.

Out of Scarlight by Liz Williams and A Man without Honor by James S. A. Corey were both solid stories that kept me reading through the crucial mid-point of the anthology, while The Last Canal was not at all what I expected from Michael Moorcock - less pulp heroism and more sci-fi adventure - but still tuned out to be a favorite of mine.

The Sunstone by Phyllis Eisenstein was another solid tale with an archaeological element, while King of the Cheap Romance by Joe R. Lansdale turned out to be the high point of the entire collection. Mariner by Chris Roberson executed a bit awkwardly on its religious commentary, and would have fared better had it not come after Lansdale, but The Queen of Night's Aria by Ian McDonald redeemed it with a story strong enough to anchor the end of the anthology.

Definitely heavier on the read-its than the skip-its, Old Mars wasn't quite the John Carter sort of homage I expected . . . but probably the better for it.