Mark of the Worrier by Steven Grassie (GUEST POST) 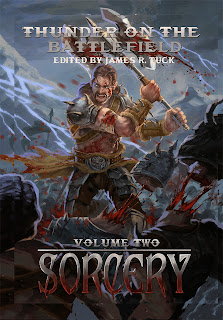 Thunder on the Battlefield.

Four words. Four carefully chosen words that combine to form an evocative phrase any fantasy writer should be galvanized by, surely?

Well, I certainly was. When I stumbled across the call for submissions for Seventh Star Press’ sword-and-sorcery anthology, helmed by none other than James R. Tuck, I knew I’d be throwing a story into the mix. But the deadline was only a few weeks away, and I had to get moving.

But what to send? I quickly considered my small selection of mostly-written but unpolished fantasy tales that might fit the bill; then I sifted through my larger stash of half-formed, partly-written stories… and realized with some trepidation I had nothing that quite lived up to the project’s title.

So. A brand new story it was, then.

But where to begin?

For a good while I’d wanted to write a fantasy tale that somehow involved tattoos and their ‘powers’, whether real or imagined. I’m a Scotsman, and a history and archaeology buff, and I’ve long been captivated by my forbears the Picts, one of Scotland’s ancient ‘Celtic’ peoples. The Romans referred to these mysterious folk as Picti (‘the painted ones’), although there is still great debate over whether they merely painted or actually tattooed their bodies and faces.

Anyway, for the purposes of my as-yet-unwritten tale it wouldn’t be enough for any tattoos included to merely be decoration for the character(s) or for the story itself, or to be symbolic in nature; they somehow had to be a driving-force of the story and, hopefully, directly affect its outcome.

Eventually, having given some thought to whom my main character might be, I settled on a young male protagonist who sported a ‘special’ tattoo that was intrinsic to the story – but who was this guy, and what the hell was so damn special about his skin-art? I’ll be honest, the answers I had to these questions were sketchy at best – but I chose not to stress about that. And why? Well, as soon as I’d seen the words ‘Thunder on the Battlefield’, my opening scene was right there in my mind’s eye: a battlefield, unsurprisingly. Blood, mud, curses, the clash of bladed weapons – I really wanted to thrust the reader, along with my character Brund, into the melee right from the first word. And thunder? Well, the only thing that’s thunderous in this scene is the laughter… Intrigued? Good.

Once I’d hammered out the story’s first scene, there was no stopping it. Some tales seem to write themselves – if only they all did – and this was one of them; I was just there for the ride. Relative to its size, “Mark of the Warrior” was one of the fastest stories I’ve written. And Brund’s tattoo? Well, logic dictated that an extraordinary tattoo could only be inked on an extraordinary person…

It was a few days after hitting ‘send’, while messing around online, I discovered that the multi-talented James Tuck was a professional tattoo artist. A small pulse of shock preceded a thought of, Great, the guy’s gonna think I’m a brown-noser… Rightly or wrongly, I was genuinely worried about how Mr Tuck might see a story that could be perceived to be a sly appeal to his passion for tattooing. (I actually briefly considered dropping him a quick line explaining that it was simply a coincidence that a tattoo featured so prominently in my tale. Yeah, you’ve got it – I’m a worrier.)

And then, several weeks later, when that much-anticipated email hit my inbox and I saw that its first word was ‘Congratulations!’, my relief was almost as prominent as my joy. Don’t get me wrong, it’s always immensely gratifying when an acceptance note hits the inbox or doormat, but when it’s for a story that’s been crafted specially for an anthology (and when you think the editor might reckon you’re a brown-noser!) it holds that little bit more of satisfaction.

So the moral of this post is…? Thoroughly research the editor you’re submitting to? Scour the internet for as much information you can find for any advantage or otherwise? Surely knowledge is power, right?

Most of the time, undoubtedly. But in this case, I’m not so sure. Maybe – no, probably – if I’d known James Tuck was a tattooist, I’d have written and submitted another story altogether… one that might have been rejected, for any number of reasons. Like I said, I’m a worrier; I’d have thought the tattoo card too obvious to play. 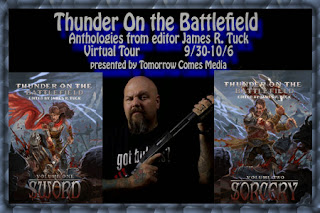 Steven Grassie was born and (mostly) raised in Glasgow, Scotland; now he lives just outside the city with a señorita and their two dogs.

He writes stuff that stands proudly under the ‘speculative fiction’ banner – essentially fantasy, science fiction, and horror. Occasionally he’s been known to write ‘literary’ stories, but he asks that you don’t tell anyone.

BEHOLD! the clash of war. Steel upon steel and heroes fighting shield to shield. The only true victory is a brave death and the destruction of your enemies. These stories harken back to a barbaric past that never was. A time when heroic men and women cut glory from the cloth of a sorcery-filled world and stole gold from the hands of the gods themselves. This is fiction that takes no prisoners. No quarter asked. No quarter given.

This is SWORD AND SORCERY. 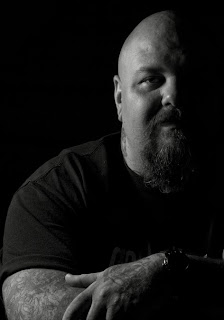