on October 14, 2013
Once again we're bringing some horror to the ruins, with another entry in our Halloween Read-tacular. Lock the doors, close the curtains, turn on all the lights . . . and enjoy. 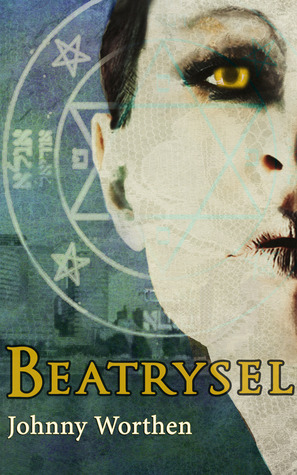 If, like me, you've ever wondered what happened to the spirit of the old Abyss Horror line from the early 80s, wonder no more. It appears as if Johnny Worthen made his own little deal with the devil, once upon a time, and invited that spirit to possess his literary soul.

There's no better way I can think of to introduce Beatrysel than with that comparison. This novel is a throwback to that brief heyday of literary horror, of books that weren't afraid to be as deep in philosophy and the frailties of the human condition as they were in blood and gore. It's horror that's as thick and cloying as day-old blood, sticking with you, getting into every pore, and never quite leaving you free of its crimson taint.

Worthen is certainly in no hurry to tell his tale, but that doesn't mean pacing is an issue. Instead, the slow build up, followed by the frantic race towards an end, is a large part of what makes the book works so well. He uses the strength of his characters to draw you, the richness of his occult-fueled mysteries to hook you, and the honest terror of the story at its heart to keep you bound tight until it's over and you're free to turn the lights back on.

Sometimes it seems as if stories dealing with Faustian deals and with occult circles went out with the demise of the 80s - and that's generally with good reason. Worthen proves, however, that there is still significant life in the tale, provided it's told by an author with the talent and the bravery to really get beneath the reader's skin. His is a claustrophobic sort of story, the kind where dread lies so heavily upon the reader that you can feel it's cold, clammy hands pressing down upon your chest.

The intertwined stories of Julian and his sister Molly are at the heart of the tale, and it's their emotional sufferings that fuel . . . well, just about everything. With each chapter that goes on, another layer is peeled back, revealing the raw, weeping flesh beneath. There's a point about halfway through the book where Worthen almost completely twists the reader's expectations, betraying some sympathies and deepening others, and that's where the hook turns into something binding. Once you know the 'truth' about brother and sister, as well as the significance of what they've suffered, you physically pull yourself away.

A lot of the horror in the book is of the suggested variety, with horrifying scenes teased almost to the brink of climax before being abandoned, and then revisited from afar. It's a tactic that made Beatrysel's literary predecessors so effective, relying upon the reader's imagination to fill in the gaps, before coldly, almost cruelly, revealing our worst fears to be inadequate. Make no mistake, there are some horrifying depictions of violence and cruelty to be found here, but it's the subtle, languid scenes - such as the phantom woman appearing from the steam of a sauna - that really send chills up the spine.

Most important of all, perhaps, is the fact that Worthen's climax proves to be worthy of all that came before. It's in the final chapters that horror often stumbles, with the author clearly struggling to provide a resolution that justifies all our fears, but Worthen pulls it off. He delivers on both the love story and the horror story, without cheating or cheapening either, and manages to maintain some genuine suspense right to the very end.

Definitely a perfect read for these dark nights leading up to Halloween.