Agent Pendergast is Back in Fine Form in White Fire (#bookreview) 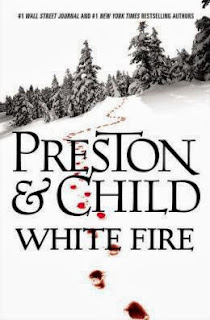 With Douglas Preston and Lincoln Child's thirteenth Agent Pendergast adventure being a stand-alone tale, and one that begins with his protégée, Corrie Swanson, taking center stage, I wasn't sure quite what to expect. Fortunately, White Fire proved to be everything we've come to expect from the man in black . . . and then some.

As it turns out, having Corrie take the lead was a smart move. The events of the Diogenes Trilogy (dealing with his brother) and the Helen Trilogy (dealing with his wife) revealed a bit too much of our enigmatic detective, removing much of his mystery. Having seen him at his very darkest, confronted by the very human sort of concerns and conflicts from which he once seemed so far removed, it's nice to have him step back a bit and once again resemble the odd sort of hero we first came to know and admire. That's not to say Preston and Child have rolled back time or forgotten his suffering - there are some glimmers of emotion here that are quite powerful - but they've allowed him to regain his composure and rebuild the walls of his personality.

As for Corrie, she's a very different sort of protagonist, but likable despite her flaws. She's impetuous, headstrong, and rebellious . . . a typical college student. Her attitude gets her into a lot of trouble, and while some readers may accuse Preston and Child of exploiting that fiery defiance to create some of the novel's tension, there's nothing that is out of place for her character. We, as readers, may know it's never a good idea to ignore Agent Pendergast's advice, but when your education and your future career are on the line, in jeopardy of being overshadowed by a man of such legendary stature, you can't fault Corrie for her actions.

As for the plot, there are really three story lines here that slowly converge over the course of the novel, revealing the extent to which they're connected. The 19th century forensic mystery that forms the basis of Corrie's thesis is probably the most unsettling of the three, pointing as it does to some very grotesque criminal behavior among the miners of the time. The contemporary mystery of the murderous arsonist is far more sensational, with some incredibly horrifying scenes of callous torture that rival anything we've seen before, but it's tainted by the times. We've come to expect that kind of violence - we see it every day in the news, or on television at night. While the events of 150 years ago aren't quite as sensational, they must be considered in the context of the time . . . a time in which Sir Arthur Conan Doyle himself could hardly believe the news.

That brings us to the third story line, that which pulls everything together. Having heard the true story of what happened from Oscar Wilde, Doyle wrote one last Sherlock Holmes story on the subject, but it was rejected as being far too horrific for Victorian sensibilities. It falls to Agent Pendergast to investigate the situation and track down that 'lost' story, which provides him with the clues to solve the case. Not only do Preston and Child incorporate Doyle as a character, but they set out to write that 'lost' tale, with the approval of Doyle's estate. It's a very Hound of the Baskervilles type story that they include here, serving as both an homage to the man who inspired Pendergast, and as a solid story all on its own.

As for how it all concludes, the final pages of White Fire contain the same kind of breakneck pacing, twists, turns, and betrayals we've come to expect from the series. There's one scene I thought was a bit of a cheat, with the big reveal something we couldn't have easily anticipated, but looking back I can see the clues that at least suggested the possibility. Corrie comes off as a legitimate heroine in her own right, with a terrifying flight through rattlesnake infested old mining tunnels that is Indiana Jones worthy. As for Pendergast, he is very much the hero of old, restored and rejuvenated, and passionate once again about a mystery for the sake of a mystery.

While I wouldn't count it in my top three Agent Pendergast adventures, it was still a great read, and one that deserves its place on the holiday bestseller lists. Yes, Agent Pendergast is back in fine form in White Fire. Fans will not be disappointed, and new readers will find this an easy entry point into the series.