on June 10, 2013
10 Fun Things to Do During the Zombie Apocalypse
By Melanie Karsak

I hate in when people in movies act like they have never seen a movie. Everyone knows you should head out the front door rather than going up the stairs. Everyone knows to check the back seat of their car. Everyone knows you should shoot a zombie in the brain. Am I right? Why do characters in movies always act like there is no precedence for the apocalypse? In particular, I hated the scene in Zombieland when the two sisters went to the amusement park. Even if the park was “zombie free,” common sense dictates that zombies will notice lights and sounds blaring in a world otherwise devoid of lights and sounds. Drawing attention to yourself during the zombie apocalypse is just plain stupid, but there are some fun ways to amuse yourself and stay safe at the same time. The residents of Hamletville, the survivors of z-day in my novel “The Harvesting,” have a few suggestions if and when you ever need to know . . . what can I do for fun during the zombie apocalypse?

10. Commandeer a police cruiser! First, you wire separator will protect you from anything lurking in the backseat. Second, there is probably a loaded weapon inside. Bonus. Third, it can haul ass if needed. Lastly, haven’t you always wanted to do that? Just don’t fall into a movie trap: don’t turn on the sirens.

9. Steal stuff and things! When I say stuff and things, I mean guns and food. Keep your focus on the bare necessities, but staying alive during the apocalypse is really fun! Steal away, survivor. Your life depends on it!

8. Set things on fire! You might not have any pyromaniac inclinations, but when you encounter a building full of zombies, strike a match! I know the movies would probably have you trying to sneak into the building for some desperately-needed supply, but try to resist.  After all, whatever it is, you can probably still find it at Walmart.

7. Pick up a new hobby! Haven’t you always wanted to wield a machete? Didn’t you ever wonder what it would be like to shoot a machine gun? Now is your chance! Not the physical type? Try learning herb-lore or how to hot-wire vehicles. There’s nothing like the apocalypse to force you to try out some new skills!

6. Try to figure out your “role” in the group. This will help you determine how long you’re going to live. Are you the hero? Are you the side-kick? Are you the romantic love interest? Are you the one who is going to turn to the dark side? Are you wearing a red shirt? If so, I suggest you change it immediately. Once you know your role, you can plan accordingly!

5. Borrowing one from the 2004 Dawn of the Dead, here is a fun game: Pick a perch on a rooftop. Identify zombie movie star look-alikes and fire away! Make it a challenge. Who can take out zombie Howard Stern? Zombie Rosie O’Donnell? It’s fun, safe, and you can shoot a Justin Bieber look-alike from 100 feet away!

4. Borrowing one from The Walking Dead . . . zombie gladiator fighting! Before everything went to hell in Woodbury, the Saturday night entertainment included coliseum-esque battles. But who needs lions when you have zombies!!

3. Borrowing one form Night of the Comet . . . go shopping! You’re probably going to die soon, so why night take a moment to indulge that last inclination toward materialism. Go to your death wearing 10-carat diamonds!

2. Live like you’re going to die! (Because you probably are.) She/he might be a hot mess, and they probably haven’t seen a toothbrush or a stick of deodorant in a month, but you’ll both be dead soon. Put your “zombie goggles” on and go out on a high note.

1. When you see you ex walking around all zombified, just walk away.

Like tales of the undead? Check out “The Harvesting,” by Melanie Karsak. “The Harvesting” is a dark fantasy novel that chronicles the z-day event from the perspective of Layla Petrovich. Layla, returning to Hamletville just as the world begins to die, finds herself struggling to protect the people of her small home town. But zombies are not her only problem. Layla soon finds herself in the middle of a battle for our middle earth. “The Harvesting,” the first novel in the series, is available at Amazon.com, Smashwords, and Barnes andNoble.

When mankind finally consumes itself, can any spark of humanity survive? Layla fights to keep those she loves alive when the zombie apocalypse unfolds, but she soon learns that zombies are not the only problem. With mankind silenced, those beings living on the fringe seek to reclaim power. Layla must learn who to trust, fast, if she hopes to save what is left of our kind.

Melanie Karsak, steampunk connoisseur, white elephant collector, and caffeine junkie, resides in Florida with her husband and two children. Visit the author at her blog, melaniekarsak.blogspot.com, to learn more about upcoming projects. 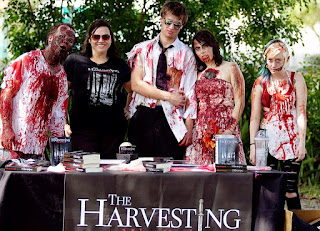 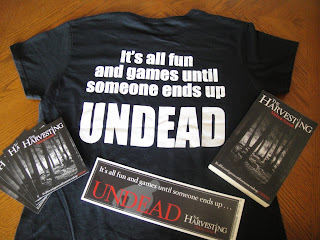