Q&A With Julie E. Czerneda (author of A Turn of Light) 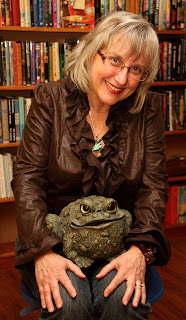 Many of you know Canadian author Julie E. Czerneda as the former biologist turned science fiction novelist published by DAW Books NY. You may have read her Clan Chronicles series, or be a fan of Mac or Esen from her other work. Maybe you’ve heard she’s an editor. Also true.

This spring, however, prepare to meet the Julie you don’t know.

After three years of work, she’s letting out her whimsical side with the release of her first fantasy novel, A Turn of Light, also from DAW. The setting, Marrowdell, is based on pioneer settlements in Ontario. There are toads. And dragons. The magic? All her own.

To help celebrate the release, Julie was kind enough to stop by for a brief Q&A . . .


Bob: It’s been 15+ years since your debut upon the bookshelves with A Thousand Words for Stranger. With A Turn of Light just having hit the shelves, does the whirlwind of activity around a new release still generate the same level of wonder and excitement, or is it a different experience these days?

Julie: When my first novel came out, I’d no idea what to expect. I’d vague notions signing it might come up, and possibly – hopefully? – someone might review it somewhere. My previous experience in promoting non-fiction books at events like Book Expo, seemed unlikely to apply to conventions and bookstores, other than the obvious, to continue to be professional and polite. I knew enough to have reasonable, i.e. low, expectations for a first novel’s success and thought that was measured in sales.

Then I met my readers and learned what success was.

The first to approach me for an autograph offered me a book wrapped with a rubber band. She’d dropped it book in a bathtub and the glue was failing. Oh, the joy of it! I’D BEEN READ IN A BATHTUB!!!! I love reading in the tub. Someone had read my book in the tub. Best moment ever.

Until the next. My first fan letter arrived. It began “this is a fan letter” because the person sending it, a stranger, was well informed about authors and had a good grasp of my experience to that point. I HAD A FAN LETTER!!!!

There were so many more wonderful moments. The time when I found someone in a store holding one of my books in her hands and I announced with delight “that’s my book!” She immediately clutched it tight and gave me a stern look. “No, it’s mine! I’ve looked for this everywhere. It’s the new one from my favourite author.”

Has the wonder and excitement changed since then? Yes. It’s grown, exponentially, per book. I think it’s the anticipation. I know how fabulous it will feel to have someone take home my new book. I’ll watch each leave my hands with a tender, breathless hope. Will it be loved? Will it fall in a bathtub? I’m constantly surprised and touched by the kindness of my readers. How can I do more for them? It’s a lovely challenge. With Turn, having been so long since my last new book, all is a special delight.

Bob: You come from a military family, with both parents in the forces, and grew up on a series of air force bases, taking you across the country. To what extent has that life experience influenced your fiction?

Julie: I’ve wondered if anyone would ask. Thanks! As an air force “brat,” I thought it was normal to clamber in and out of high tech planes, read spec sheets, and dream of space. Air shows were our fall fairs. The families we visited, during and after, were members of my Dad’s aircrew. I grew up in a household with a world-view, rather than a local one. It wasn’t just memorabilia from both world wars that were reminders; my Dad flew during the Cold War and toured the world for NATO. I remember every day of her life, my Mom would read every available newspaper to keep up with current events -- and would expect me to know too.

Imagine the culture shock when we left the force and moved to a small suburb outside Toronto.

My new very nice friends had lived their entire lives in the same house and considered a trip to the same Muskoka cottage each summer was travelling. As for world events? Few, if any, knew or seemed to care. Blending was a struggle my family simply didn’t attempt. We kept in touch with distant friends, hosted interesting parties, and became the nice, quiet neighbours who were a little weird. It led me to introspection, I think. I was already inclined to being an observer and info-junkie. While my friends were away for the summer, I’d read about space travel and wander the local marshes with my dog.

Would I have become a writer if I’d lived a different life, without a head lost in the sky and feet happily in silt? Not the same one, I suspect.

Julie: We work hard? I find this a tough question, because I can’t speak as a not-Canadian. I’m vastly proud of us. We have fabulous talents who have the courage and drive to put their creativity to the test. The community of Canadian writers is a wonderful one, supportive and enthusiastic. We party, in my opinion, very well. (But then so do all the genre authors I know.)

Bob: Over the years you’ve become known primarily for your science fiction trilogies, but you’ve also written your share of fantasy shorts, and edited several fantasy anthologies. As a writer, do you have a preference for one genre over another?

Julie: No. Okay, I did. Science fiction, for me, has been easier. My fantasy shorts, which I did before trying a novel, were low-cost experiments, so to speak. If I succeeded, I’d learned something. If I failed, ditto. With A Turn of Light under my belt, I feel much more comfortable as a fantasy writer.

It’s a great thing, to have two such powerful vehicles at my disposal. When I’ve a question about how the universe works and our place in it, I’ll turn to science fiction to speculate on the answer. When I’ve the desire to reshape the world and explore the human heart, fantasy awaits. Both call to me; both are wonderful fun.

Bob: Sometimes, characters can take on a life of their own, pulling the story in directions you hadn't originally anticipated. Has a twist or turn in your writing ever surprised you, or really challenged your original plans?

Julie: I used the analogy of a vehicle earlier, so let’s say I’m the driver when it comes to my storytelling. I start by developing a level of complexity and detail for my characters and worlds, yes, but when the writing of plot begins, I’m following a road map. Not so much written down – I tend to outline only when time’s not my friend – but I know my destination and the major roads to get there. In a sense, my characters are those roads. I build them first and they stay put and do their part. It’s not the dry process it sounds. It’s more that any twists and surprises from characters and/or plot are something I’ve worked through in the noodling* process (a professional writerly term borrowed from Nalo Hopkinson). I have a great many “AHA!” moments, usually in the shower or late at night, but I consider those my hindbrain continuing to chew away while I’m not paying attention, not characters conspiring.

Perhaps it’s because I feel it’s very important that an ending feels right -- nigh inevitable -- once it arrives. For that to happen, the ending must be supported, with the stages to reach it well-thought. Surprising the reader is one thing, but it needs to be done in a good “but of course!” sort of way. The trust between reader and scribe is everything. How else can I invite them along with me with each new book? 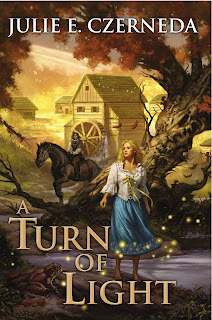 The village of Marrowdell is an isolated pioneer community, but it is also the place where two worlds overlap, and at the turn of light--sunset--the world of magic known as the Verge can briefly be seen.

Jenn Nalynn belongs to both Verge and Marrowdell, but even she doesn't know how special she is--or that her invisible friend Wisp is actually a dragon sent to guard her... and keep her from leaving the valley. But Jenn longs to see the world, and thinking that a husband will help her reach this goal, she decides to create one using spells. Of course, everything goes awry, and suddenly her "invisible friend" has been transformed into a man. But he is not the only newcomer to Marrowdell, and far from the most dangerous of those who are suddenly finding their way to the valley...
Canadian fantasy interview Julie E Czerneda