While it's not a 'bad' novel by an means, The Darkening Dream is one book where I had a hard time finding the hook to keep me reading. The characters were a bit too thin to truly engage me, and a bit too independent for the first decades of the twentieth century, which made it hard to take their plight seriously.

Having said that, Andy Gavin does an admirable job of mixing magic and mythology, presenting us with a world that is fascinating to explore. Rather than placing religion and the supernatural at odds with one another, he brings them together, adding an interesting new edge to not just his vampire, but the overall tale. Some readers may be overwhelmed by the sheer amount of mythology included here, with various cultures and themes represented, but it added to the overall story.

The characters themselves were a bit too religious for my tastes on the one hand, and a bit too progressive in their attitudes on the other hand, but their core beliefs were entirely in keeping with the time period, so I can't fault Gavin for that.

For a while, I wondered whether I had inadvertently stepped into a YA piece of dark fantasy, but then the horror - and the dark sexuality - reared its gratuitous head. I was actually a bit shocked at what the author put his characters through, and if I'd been able to make a connection, then I think he may have creeped me out. Sarah is the one character in whom I took any sort of significant interest, and that was largely after the fact, with her twist decision at the end of the tale a high-point for me.

One minor complaint in terms of the narrative is that some scenes were just too short, making me wonder why Gavin bothered with the POV change at all. It almost felt like a quick splash screen in a video game, transitioning between one element of the story to another, so it may just be habit. I like my scenes long and in-depth, giving me a chance to become immersed in the story, but that's a personal complaint.

Overall, an interesting story, well-told, with a nice layering of mythologies. It's a bit too mature in some senses for the YA market, and a bit too simplistic in others for the adult market, but I suspect it would make a great read for those looking to make the transition. 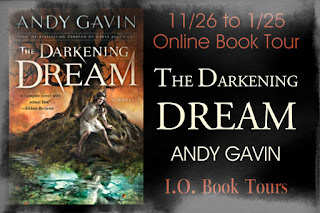 Andy Gavin is a serial creative, polymath, novelist, entrepreneur, computer programmer, author, foodie, and video game creator. He co-founded video game developer Naughty Dog and co-created Crash Bandicoot and Jak & Daxter. He started numerous companies, has been lead programmer on video games that have sold more than forty million copies, and has written two novels including The Darkening Dream, a dark historical fantasy that puts the bite back in vampires.