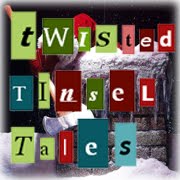 Welcome to the Twisted Tinsel Tales!

To help kick off our first full week, please allow me to introduce you to Tony Dews, twisted contributor the Ho Ho Horror anthology (GLITTERING WERE THE LEAVES), who has stopped by with a holiday themed guest post.

Ah what tangled webs we weave when first we practice to write Christmas horror. Well maybe that isn't quite right and perhaps it isn't up to me to write on the subject since of all the stories in Ho Ho Horror mine is the only one that doesn't mention Christmas at all. Not once. Nowhere is there a mention of bad Santas, Elves of any stripe you care to give them or even reindeer that feast not on grass but bad children but maybe there is a place for them somewhere down the line when I come to think of it.

The birth of the story came from an episode of Dr Who when the Doctor, played by David Tennant, trapped a member of the Family of Blood in a mirror. All mirrors. And then came the question, what if you saw that trapped image? Then it morphed into what if you saw something at the edge of your vision, then saw it again and again and what if they became real? What then? And then take it one step into the past and then in the present and what would happen if someone who read the story saw them? Anyway that's how my tale came into being.

Is doing Christmas horror a challenge, perhaps so and yet it needn't be if we avoid the trap of using cliché. By that I mean the twist of  using something we might not think of at first, Santa is way too obvious to me but done well it can work and work well. But there are other things to look at that would work and are worth a little bit of thought. Mistletoe for instance. We all know that we kiss underneath a sprig of it but do we know it links to sexual potency and that it could cure almost any disease? What would you do if you kissed someone under the mistletoe and became so potent you could have anyone you wanted at any time and what would be the result? And the wreath which was used to keep out evil spirits so what would happen if it didn't? I can see an old man with a weapon of some sort hiding in a house covered with wreaths and what was he keeping out and did he succeed? And what of overseas? Oh there are a lot of things we can use to cause a shiver down the spine, oh yes indeed there are.

In Bulgaria they eat blood sausages, but where does the meat and the blood come from hmm? In Hungary, Old St Nick is accompanied by a devil boy who smacks naughty children but what it the real thing got sick of this and came a-calling? And in parts of Scandinavia it was considered dangerous for many years to sleep alone on Christmas Eve. What if someone today found out why that was such a strong belief? The possibilities are endless when you look at the legends and symbols around the place and start asking the same thing as I did. “What if?” And guess what? Not a Santa nor an elf among them and how freaking good is that?  Tales with a twist on themes that haven't been used before. Well maybe it's time we did use them and took up the challenge to create something new and fresh. And isn't that what writing is all about?

Oh I almost forgot, Merry Christmas and may Santa bring you all you asked for, as long as you're careful about you asked for that is . . .
guest post horror Twisted Tinsel Tales