While intriguing, and with enough moments of inspired darkness to keep me curious, Legends of Darkness (Remnants of Life, #1) was a tale that never really grabbed me.

The concept was an interesting one, and I quite liked the transformation of Samoda from average mother and everyday wife to bloodthirsty warrior. The fact that her refusal to let go of her past life had very real consequences for those around her was a nice touch , and probably what kept me reading. In some ways, her struggle reminded me of Thomas Covenant . . . although she was far easier to like, even if she lacked his tragic depth.

For a paranormal fantasy, however, this was a very heavy tale, owing as much to the style of telling as to the themes within it. Georgia L. Jones is a very descriptive writer, laying out each scene in almost painstaking detail. The sheer amount of detail made the story drag for me in many places, as did the short, almost jagged sentences, and the scarcity of dialogue. I found it hard to find a flow, or to get into a rhythm with the story, although readers who like to be immersed in the details will likely appreciate the style.

The romantic elements definitely carried more weight than I expected, which may increase the story’s appeal to fans of the genre, but I’ll admit to being impatient for more action. There’s definitely an interesting story here, with a strong character to lead it, but the narrative could have benefited from being whittled down. 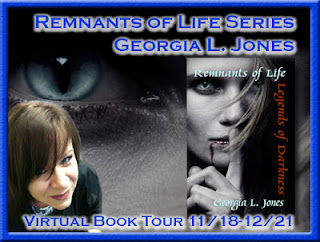 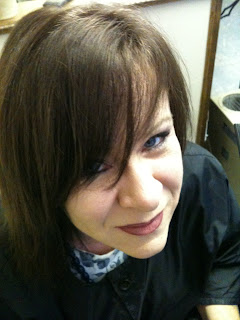 Georgia L. Jones was born in Columbia, Missouri on September 21st, 1968. In 1992 she settled in the beautiful Ozarks town of Lebanon, Missouri, where she met and married the love of her life. Together they have raised 7 children and have the 8th still in their home.

At a young age Georgia learned the value of getting lost in a good book. She has always enjoyed reading and letting her imagination run wild. In her early teenage years she began to put her own stories down on paper as she plunked out the words on an old manual typewriter.

In 1996 Georgia enrolled at Missouri State University where she majored in Psychology. While there she found an untamable thirst for Philosophy and Greek Mythology. Many evenings she can still be found curled up with one of the great Greek Tragedy’s or reading about personal continuity by Rene Descarte.

Over the years Georgia has harbored the dream of being a published author and written many short stories. On January 10, 2010 she embarked on the dream as she began to bring the characters from her first novel, “Legends of Darkness”, to life. Upon completion in June 2010 she realized that it was not a single book but a series and created the concept of the series “Remnants of Life”. She is currently working diligently on the “Remnants of Life” series.


Disclosure of Material Connection: I received this book for review from Seventh Star Press author as part of a virtual book tour. I was not compensated nor was I required to write a positive review. The opinions I have expressed are my own. I am disclosing this in accordance with the Federal Trade Commission’s 16 CFR, Part 255: “Guides Concerning the Use of Endorsements and Testimonials in Advertising.”
book review paranormal romance urban fantasy