on November 29, 2012
Solaris has announced an exciting new addition to the best-selling world of King Rolen’s Kin, an ebook exclusive from Rowena Cory Daniells entitled The King’s Man. 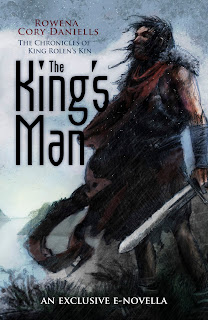 Returning to the world she created for the best-selling series The Chronicles of King Rolen’s Kin, Rowena Cory Daniells has crafted a brand new novella – available next week from Solaris!

In the Chronicles of King Rolen's Kin trilogy everyone believed Garzik had been killed. This ebook exclusive reveals what happened to him.

When Dovecote estate fell, Garzik, younger son of Lord Dovecote, was captured and sent back to Merofynia as a prize of war. Feeling responsible for the fall of his father’s estate – and therefore, ultimately, the fall of the Kingdom of Rolencia – Garzik must set things right before he can return home.

He decides to turn his misfortune into opportunity, to spy for the rightful king, Byren, who yet thinks him slain at Dovecote. With fortune on his side, he may learn something that could change the path of the war, then escape, return home, find Byren and redeem himself. For Garzik is and always will be the king’s man.

With its explosive mix of political intrigue and magic, The Chronicles of King Rolen’s Kin remains the best selling Solaris series. Discover for yourself why with this new and exclusive ebook from Solaris.

If you're new to the series, check out my reviews of the first 3 books here:

The King's Bastard
The Usurper
The Uncrowned King

If you've been waiting anxiously for the next chapter, then check out my review coming soon (Rowena was kind enough to send me a copy earlier this week).
epic fantasy Rowena Cory Daniells