Part near-future dystopian science fiction thriller, and part cult horror novel, Kingdom is a chilling journey through the underworld of Tiber City. It's a story about greed, debauchery, idealism, and the shaky foundations of even our best intentions. Politics, science, and humanity - none of it is safe from the dirty, distorted lens that Anderson O'Donnell allows to peek into every darkened alleyway, and behind every closed door.

Told through three perspectives, the story takes us into the minds of a rich playboy, a fallen geneticist, and corporate guru, and forces us to witness the world through their eyes. Having multiple perspectives that are so very different from one another is a challenge, but Anderson handles it well. His characters aren't particularly deep, and it's hard to form any sort of emotional attachment to them, but they're distinct, powerful, and effective. They're neither likeable nor admirable, but they do demand a certain degree of sympathy, if not compassion.

Where the story really shines is in its world-building and atmosphere. Portraying such a dark and gritty dystopia only a few years into the future is another risk, but it lends the story a sense of immediate consequence that really grabs hold of the reader. The designer drugs, the genetic engineering, and the body modifications are just a part of the package. Ironically, since I'm far more interested in the science and the technology, I would have like more detail about the order of monks and what led them to their soul experiments, but maybe that will come out more in subsequent books.

The writing itself isn't just solid, it's superb in its use of language. The dialogue is stronger than I've encountered in quite some while, with several quotes and conversations that would definitely become part of pop culture had this been a movie. O'Donnell's voice is dark, and highly opinionated, but that's one of the charms of the book. If he has one flaw, it's that he tends to ramble on a bit a times. The story could have been a bit leaner in places, but I'm not sure it'd be as easy to maintain the overall tone without his commentary, so it's a hard choice to make.

Unique, original, and exciting, Kingdom proves that O'Donnell is an author to watch. 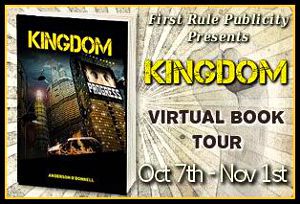 Anderson O’Donnell presents a biopunk, dystopian noir-esque thriller in this amazing read, KINGDOM. Most people are familiar with the term “cyberpunk,” but “biopunk” is harder to nail down. In many ways, biopunk is similar to the cyberpunk genre, and shares many of the same themes and archetypes: the dystopian future; the overreliance on technology; mega-corporations; a constant and overwhelming flow of data; the anti-hero—these elements are integral parts of both genres.

Both genres are fueled, to some extent, by the sense of rebellion and desire for individual freedom expressed by the original punk rock revolution. But the main difference—the most important difference—is that while cyberpunk focuses on invasive technological modification of the human body, biopunk explores the dehumanizing consequences of biological modification, of re-arranging our DNA in the pursuit of perfection.

Anderson lives in Connecticut with his wife and 2 sons. Anderson himself deems Kingdom as “a thrill-a-minute, bio-punk myth that manages to wrestle with the most pressing issues of the new millennium. O’Donnell has crafted a kickass novel of tomorrow night, when the big party gets raided by the monsters we’ve been building for the last half-century.”

His debut novel, Kingdom, a dystopian, biopunk thriller, is now available in paperback and ebook format. Kingdom is the first part of the Tiber City Trilogy. Look for part two, Exile, in the summer of 2013.

Disclosure of Material Connection: I received this book for review from First Rule Publicity from the author as part of a virtual book tour. I was not compensated nor was I required to write a positive review. The opinions I have expressed are my own. I am disclosing this in accordance with the Federal Trade Commission’s 16 CFR, Part 255: “Guides Concerning the Use of Endorsements and Testimonials in Advertising.”
book review sci-fi tour-FRP