on February 03, 2011
It was T.S. Eliot who proclaimed April the cruellest month, and I whom proclaim that to be a bold-faced lie. February - dreary and depressing, despite the artificial addition of it's mid-month Hallmark holiday - is well and truly the cruellest month.
The only reason August outranks it for suicides is the fact that February's been cheated of a few days by the calendar.
So, here we sit, huddled against yet another severe cold weather alert, and virtually homebound by yet another blast of snow. Since the snow began to fall back in November, we've literally had fresh snow three out of every four days. As for those all-too-brief glimpses of sun, and those near-mythical moments when the temperature flirted with the plus side of zero, they're just Mother Nature's way of twisting her knife of cruelty.
I have come to loathe every minute of it. The only thing worse than shovelling out the driveway for another slippery drive into work is the thought of being stuck indoors . . . again. To hell with the cold, to hell with the snow, and to hell with the darkness that falls before dinner. Today, I left work with only one goal in mind - to get out.
For no particular reason, I decided to head out on the highway and drive up to Jordan, home of the Niagara Region's only pirate ship. Abandoned since 1997, and a burned out hull since 2003, the rusty old ship still manages to dominate the shoreline. 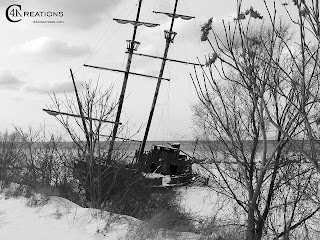 The first glimpse is one of sorrow. The rusting hulk looks as if it's ready to fall over onto its side, being held up by nothing more than the frozen harbor. The burned out timbers have all rotted and fallen away, denying the ship even the suggestion of it's original 'pirate' glory. 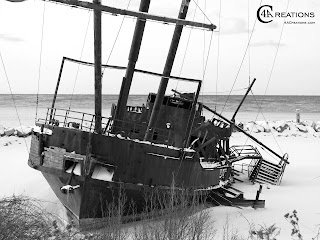 On a clear summer night, with the green-black waves gently lapping againt it's hull, it can still manage to look quite magnificent. Silhouetted by a full moon, wrapped in warm shadows, it looks like a ghost ship, ready to sail. But in the cold, harsh light of a February afternoon, the ships looks pitiful. Encased in ice, with pieces laying torn and broken, it looks like a petulant child's broken toy. 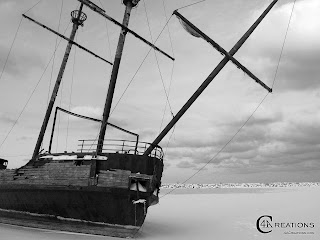 As you skirt the shore, however, the picture changes. Forget the highway behind you, ignore the marina to your right, and step through the brush before you. Take away all the distractions, and you can imagine yourself standing in the Arctic, gazing out at the frozen wreck of a 19th century ship, lost in search of the fabled Northwest passage. 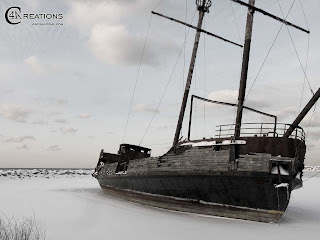 For a moment, the cold and the snow become transformed. It's no longer the cruel burden of another Canadian winter surrounding you. Instead, for so long as the ship remains fixed before you, it's the promise of an Arctic spring. The tantalizing suggestion of a partial thaw, and the hope that she might break free and sail again.
jordan harbour photo exploration