on September 05, 2009
Beyond Lock 19 lies the towering ruins of the Pumphouse. In an ironic nod to the past, 'Siren Sounds' stands silent sentinel over the slumbering locks of the Third Welland Canal. Chipped and worn by time, its walls lie permanently stained by decades of mold and mildew, while the wooden sluice gate stands fast against the darkness inside. 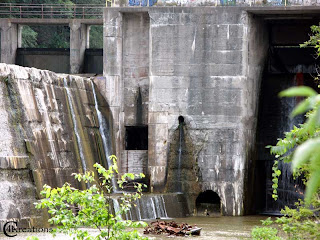 Sitting several stories above the base of the canal, the Pumphouse itself is but a shadow of its former glory. Its windows are bricked over, it's doors cemented shut, and vandals have spray-painted every inch within their reach. Only a single access door remains, it's solid steel secured by both key and combination, protected by a second gated door, itself padlocked against intruders. Intimidating, well-intentioned, and - on this day, at least - susceptible only to the hand that reaches out . . . and finds it all unlocked. 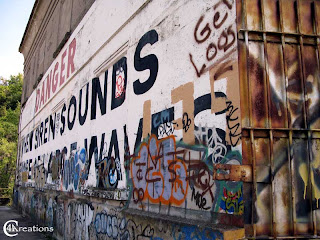 Inside, the Pumphouse retains little of its original equipment, but what remains provides an interesting glimpse into history. In one corner lies a floor-mounted winch, still connected to the wooden sluice-gates far below. 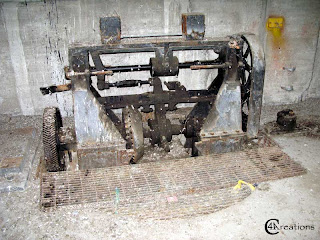 Not far away, a motorized system sits atop the two spillways, dirty and rusted for sure, but not entirely neglected. High atop it all, an antique series of pulleys and chains hang from the ceiling, wanting only a shot of oil and a strong hand to return them to life. 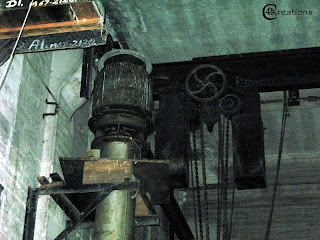 Now, step back outside and take temporary solace in the sunshine. Having traveled from end-to-end, from the ruined beauty of Lock 12 to the unlocked interior of the Pumphouse, it is now time to descend into one of the canal's best kept secrets. Well off the beaten path, far below the Seaway Haulage Road, lies the ruins of the Grant Trunk Railway tunnel. 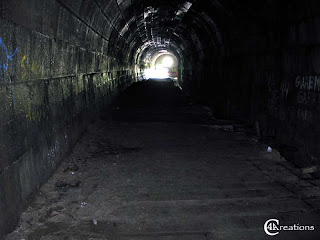 713 feet long, 16 feet wide, and 18 feet high, the tunnel once carried trains from one side of the canal to the other, sending them under those very same boats from which came their cargo. Abandoned in 1915, the tunnel has been buttressed against the crushing weight of the canal itself, yet it remains a cold and damp, perpetually dark, and prone to flights of imagination. Stepping into the tunnel is like stepping into another world, especially once you make the first turn into total darkness. Old railways ties, slick and slippery from years of dampness and decay, provide an uncertain footing. As you stumble carefully along, the temperature drops rapidly, so cold you can see your breath and literally watch as your body heat escapes into the air. Above you, water drips from the ceiling, forming a curtain of rain that slowly freezes itself into a wall of icy stalactites over the course of the winter. What's more, those who brave the long, dark journey do so only to find their progress abruptly halted by a a few feet of mud and water. 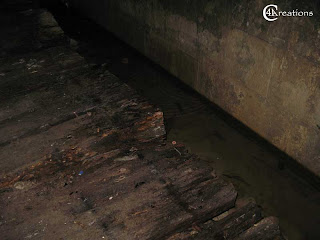 With its tragic history of 2 men killed just 100 yards from the tunnel during a 1903 railway accident, and an even more morbid tale to follow -- multiple graves from the St. Peters Church graveyard not moved, but left to be quite literally washed away when the Pondage reservoir above was created in 1923 -- it's no wonder that these conditions prompt visitors to see ghosts in the mist and orbs in the water-laden air. For this reason, the GTR is far more commonly known as the BGT, or Blue Ghost Tunnel. 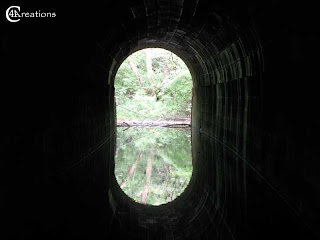