on September 15, 2009
Every once in a while, the hand of fate wraps its cold fingers around the wheel, wrestles it from your grasp, and steers you away from the hustle and bustle of highway traffic. It's touch might come as an ache in your back . . . a stiffness in your legs . . . a thirst, at the back of your throat . . . or a gentle pressure, building slowly, then suddnely crying for release. Regardless, those who listen close, who heed its advice, are often rewarded with sights from the road less travelled.
Such was the case one sleepy Sunday morning upon a featureless stretch of highway in Northen Pennsylvania. We hadn't been driving long when we felt the touch, the guiding hand of fate directing us to a nondescript single-lane exit. There was nothing to catch the eye, nothing at all to promise it'd be worth our while to delay our arrival back at home. We hit the exit anyway, drove a few miles into farmland, took a few random twists and turns, and then we saw it -- a wall of stone, with arched gates, surrounding an empty field of grass. It looked so odd, so out of place, I had to check it out. 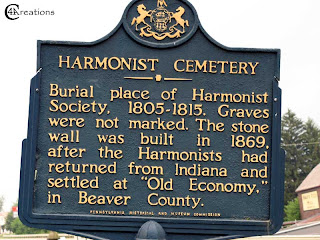 According to the historical plaque aside the road, fate had drawn us to the Harmonist Cemetery. Over 200 years of history lay inside those 150 year-old walls, with not a single tombstone to be seen. That mystery alone was enough to peak my interest. Had it not been, the sight that greeted my eyes upon ascending the hill would certainly have sealed the deal. 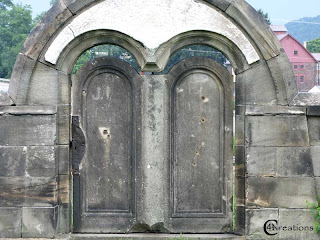 Those pitted, pockmarked, chipped, and faded doors absolutely defined the very idea of finding beauty in ruins. They were like a pair of matched tombstones, standing nearly six feet high, and set upon an invisible pivot, set deep into the stone. The ancient iron press-plate had clearly seen better days, and looked as if it might even be locked. I pressed my hands against the stone. Nothing. I pressed harder. Nothing still. I shifted my hands to the very edge of the gate and leaned into it. 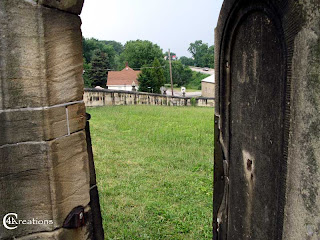 Lo and behold, the gate swung inward, as smoothly and silently as if it had been greased that morn. I stumbled into the courtyard and stared at the hillside swath of grass, bordered on all four sides by a wall that kept the outside world at bay. Feeling very much like an intruder, an interloper, a defiler of sacred ground, I stepped out into the yard. I watch the ground as I walked, with one eye searching for half-buried markers of old, and the other watching for the first bony hand to emerge from the dirt and wrap its cold, dead fingers about my ankle. 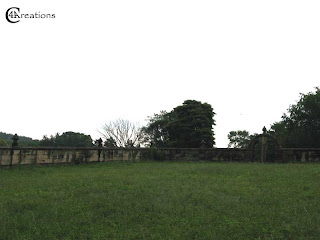 I reach the bottom corner unmolested, and unrewarded by a gravemaker of any kind. Looking up, across the yard, towards the gate, was very surreal. Had I not pushed my way in, I would have sworn I was on the outside looking in. As cemeteries go, it was strangely empty. Dissapointed, I started making my way back up the hill.
And then I saw it. 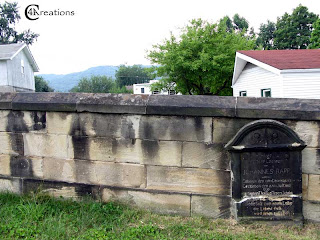 A single, lonely tombstone lay propped up against the wall, clealy mended where it had been split in two. Who Johannes Rapp was, I have no idea. Why he, of all those souls buried within those walls, deserved a stone, I don't know. What I do know -- or, at the very least, strongly suspect -- was that he didn't want me there. Quite literally, the moment I laid my hand upon the rough, cold flowers embossed upon the stone, a peal of thunder descended upon me. Startled, I looked up. Where I expected to find heavy clouds of grey, I saw instead the same white puffy clouds of ealier, with patches of blue between them.
Amused at myself, I forced myself to reach out once again and allow my fingers to trace the (presumably) Dutch lettering of the stone. There were two centuries of history in those groves, laid down by one man and traced by another, 196 years removed. Feeling a chill, I stepped back to take a picture. I'd no sooner touched my knee to ground, and the rain began. 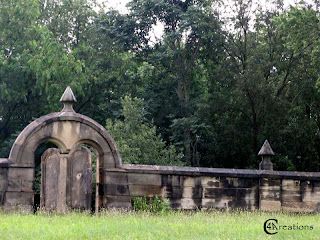 By the time I made it back to the gate, it was absolutely pouring. There were still patches of blue above, but I was already soaked to the bone. Thunder ushered me back through the gate, and lightning marked my hurried attempt to push it closed once again.
It took us twice as long to find the highway as it did to lose it. The rain pounded us so hard, so fast, we had to stop twice because we simply couldn't see the road. Having steered us to a bit of history, the hands of fate seemed determined to wash away all trace of our discovery.
Harmonist Cemetary photo exploration